Where Have All Our Marine Turtles Gone

“The Philippines lies within the Coral Triangle, the most biodiverse marine environment in the world. With this richness comes the responsibility to manage human activities around these resources to preserve ecological processes in order to maintain a healthy environment to sustain millions of Filipinos.” – Marine Wildlife Watch of the Philippines

Most Filipinos think that by supporting ecotourism, they are helping save the ecosystems where endangered species thrive.  Unknowingly, tourism contributes to the decimation of these species to the extent of being driven into extinction.  Take the case of marine turtles, locally known as pawikan.

“Tourism in natural places that does not take into account the effect they have to the environment is the threat,” explained the Marine Wildlife Watch of the Philippines (MWWP), a non-government organization advocating for the conservation and protection of marine wildlife and their habitats.

“In the Philippines, where it seems that every inch of our beaches will soon be developed for tourism, this will become a big threat for marine turtles,” deplored Dr. Arnel “AA” Yaptinchay, MWWWP founder and director. According to Dr. Yaptinchay, development of the coast where buildings are to be constructed will displace marine turtles from one of their most important life cycle habitats, referring to the nesting beach.

“Lights, infrastructure, noise, domestic animals, and pollution will not only disturb those nesting females but also their hatchlings,” he said. “Marine turtles will not nest when disturbed.”

Studies have shown that marine turtles spend most of their life in the sea and get all the things they need there.  They even mate in the sea.  But when the time comes to lay their eggs, the females return to shore, usually in the same place where they were hatched.

“If you imagine a first-time nester approaching its place of birth, how much do you think of its birth place or nesting beach remains over the last 35-50 years?” asked Dr. Yaptinchay.  “I would guess there would be very little space left for it to nest and enough disturbance developed to shoo it away. We are preventing them from fulfilling their life purpose. For me this is very tragic.”

In some instances, some tourism facilities view marine turtles as attractions.  “This is fine if you view marine turtles from a distance, but most (beach owners) are greedy and would take a turtle and put it in a tank for secured viewing for their guests,” he said.

But what Dr. Yaptinchay considered as worrisome is when beach owners would tie the marine turtle to a coconut tree or some shrub. “This has happened and is still happening,” he pointed out.

Some resorts located in some islands sometimes think they are helping marine turtles by keeping hatchlings in containers and allow them to grow for a few months before releasing them into the open sea.

“What they do not realize is that they have just disrupted the whole life cycle of the turtles,” Dr. Yaptinchay said. “Hatchlings are supposed to be in open pelagic waters for the first decade of their lives. Again, an important phase in their lives is affected.”

However, Dr. Yaptinchay believes there are ways to develop tourism without compromising the integrity of the environment.  “Technology and knowledge already exist,” he said. “We just need to learn to give the environment more importance than the money we earn.”

Marine turtles, which belong to a group of reptiles that have existed and flourished since prehistory with very little change in their basic structure, are one of the longest-lived creatures Earth has ever known and even outlived dinosaurs.

Of the seven marine turtle species known to man, five of them are found in the Philippines and all of them are considered “threatened species,” according to the Switzerland-based International Union for the Conservation of Nature (IUCN).  This means they are vulnerable, endangered or critically endangered. 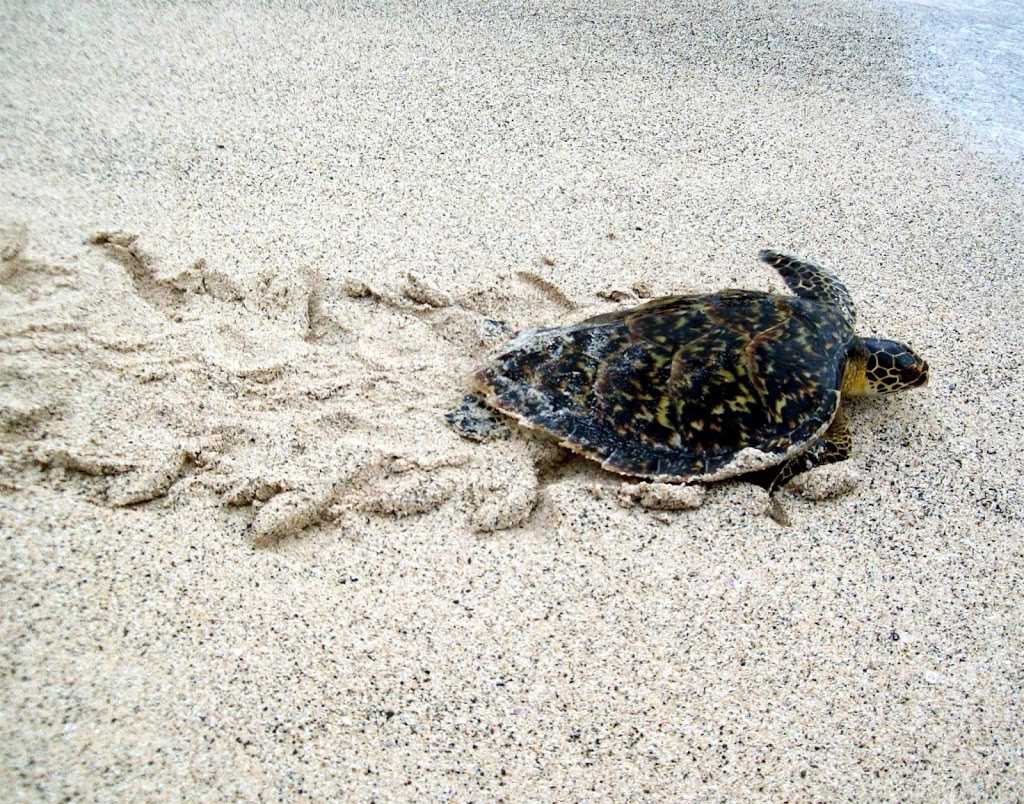 IUCN, the leading organization in determining if a species can be considered threatened or not, uses the following criteria for a threatened species: population size decline, number of mature individuals, geographic range, and statistical analysis.

Most of the marine turtles in the Philippines are found in Baguan, Taganak, Lihiman, Boan, Langaan, and the Great Bakkungan, which are part of the so-called Turtle Islands.  In the olden times, these islands used to be a favorite weekend destination of British excursionists and other nationals from North Borneo (now Sabah).

But marine turtles can also be found in other parts of the country.  The green sea turtles have been sighted as far north as the Fuga Islands in Cagayan and in the Southwest in Bancuran, Palawan.

The hawksbill turtles inhabit the Celebes Sea, the Cuyo island group of Palawan, neighboring towns of Jolo, Cotabato, and Sitangkai in Tawi-Tawi, as well as in Sablayan in Occidental Mindoro and the open waters of Sulu Sea.  The olive ridley turtles have been seen by fishermen in the shallow coastal waters of Paluan, Occidental Mindoro.

The five species mentioned earlier are listed under the Appendix I of the Convention on International Trade of Endangered Species of Wild Fauna and Flora (CITES), which means the trade of these marine turtles and its and subspecies is strictly “prohibited except for educational, scientific or research and study purposes.”

“All of the species found in our country are endangered except for the hawksbill turtle, which is critically endangered,” said Dr. Yaptinchay. “The only sure thing is that marine turtle populations are under tremendous threats.  If these are not stopped, extinction is imminent.”

Haribon Foundation for the Conservation of Natural Resources, a pioneer of the environmental movement in the country, believes so, too. “Unless Filipinos seriously take on the task of protecting the much-endangered marine turtles, these ancient creatures will soon be gone (from our waters),” it said in a statement.

According to MWWP, threats – whether man-made or not – impact marine turtles at all life-stages from eggs to adults.  “It is impossible to prevent natural predation, mortalities due to natural causes, or changes to the environment brought about by climate change,” it said. “But reducing or even eliminating human-caused threats is possible.”

In the past and even until today, the biggest threat comes from harvesting of eggs, juveniles and adults.  “Marine turtles are hunted for meat and leather; their eggs are taken for food and aphrodisiacs,” Haribon said.

In Davao City, it is common sight in barangay Daliao in Toril to see pawikan, as marine turtles are locally known, being sold in the public market.  That’s according to Truman Phillip Calipes, then a journalism student at the Ateneo de Davao University who conducted an investigative report for a magazine his group was producing. 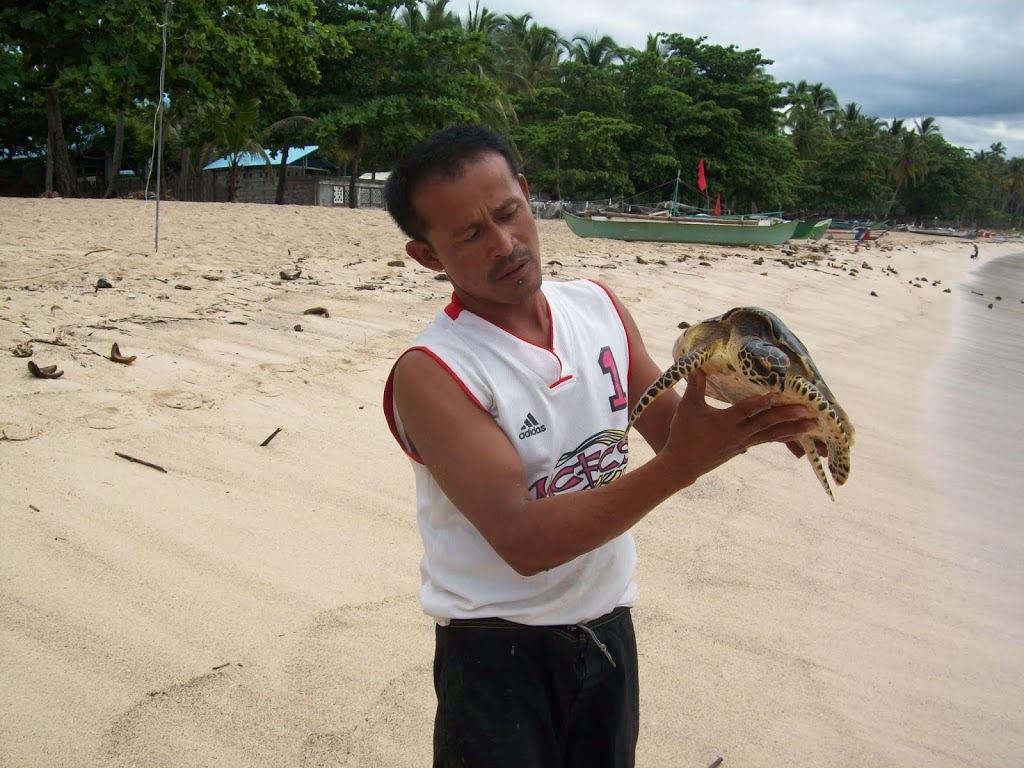 “Although local fishermen are very much aware that selling the endangered marine creatures is illegal and prohibited by the government, they are still doing it,” Calipes wrote.  “They would walk around, selling the pawikan they caught from one house to another.”

According to the report, most of these fishermen caught the marine turtles by accident. When they are pulling out their fishnets out of the water, there are instances where the endangered species are included together with the fishes.

“But instead of returning these marine turtles back into the water,” Calipes wrote, “the fishermen would just put them in a different barrel and hide them in their fishing boats to elude detection from the local authorities when they arrive at the fish port for inspection.”

As for egg collection, MWWP says it is particularly prevalent in unmanaged turtle nesting beaches.  “Even in areas where there are conservation programs, poaching still persists in the community,” it says.

But Filipinos are not the only perpetrators.  In an article published in Reptile Magazine, John B. Virata wrote: “China’s demand for sea turtle soup, turtle eggs, shells, and turtle bones ground up for use in medicine has caused Chinese fishermen to travel up to 700 miles off mainland China to hunt sea turtles in Philippine waters.”

The degradation of their habitat has also contributed to the decimation of marine turtles in the country.  The ruin of the territories results from increased effluent and contamination from coastal development, construction of marinas, increased boat traffic, and harvest of near-shore marine algae resources.

Marine turtles are also affected by plastics.  About 20% – or half a million tons – of the 2.7 million tons of plastic waste the Philippines generates annually leaks into the oceans, according to the 2015 report on plastic pollution by the Ocean Conservancy.

“Plastics endanger marine life and other animals, because they can mistake a piece of plastic for food when it isn’t,” a study pointed out.  After eating plastic, they starve and die.  Another study, published in the journal Scientific Reports, suggests that ingesting even a single piece of plastic can be deadly for these marine animals.

Four years ago, on October 23, some fishermen found off the coast of barangay 78 in Davao City a dying green sea turtle, which was brought to a non-government organization for treatment.  Hours later, it died and American marine biologist Darrell Blatchley found plastic bags which were extracted from the turtle’s stomach.

A report from the Ocean Conservancy ranked the Philippines third (after China and Indonesia) among the countries with the highest source of plastic ocean pollution, generating 1.88 metric tons of mismanaged plastic garbage annually.

Dr. Brendan Godley, professor of Conservation Science at the University of Exeter and leader of the study, commented: “Plastic rubbish in the oceans… is a major threat to marine turtles.  We found, based on beach strandings, that more than 1,000 turtles are dying a year after becoming entangled up, but this is almost certainly a gross underestimate.  Young turtles and hatchlings are particularly vulnerable to entanglement.”

Marine turtles are also being threatened by climate change.  “Potential impacts of global warming, such as projected sea level rise, can lead to shoreline erosion of small, low-lying tropical islands,” MWWP says.  “Waves running up the shore during storms will wet the nests and increase egg mortalities at rookeries in these small islands, possibly decreasing the overall reproductive success of the marine turtle population.”

The Philippines, a CITES signatory, implemented the Pawikan Conservation Project nationwide through the Protected Areas and Wildlife Bureau (now known as Biodiversity Management Bureau) of the Department of Environment and Natural Resources in 1982. Since 2001, hunting, sale and killing of marine turtles have been banned in the country.

But despite sincere efforts made by the local and national government and some environmentalist groups to save marine turtles from disappearing in Philippine waters, the decimation of the endangered species continues unabated.

“All of the species found in our country are endangered except for the Hawksbill which is critically endangered,” Dr. Yaptinchay said. “The only sure thing is that marine turtle populations are under tremendous threats and if these are not stopped, extinction is imminent.”

On the verge of extinction

The cost of climate change