Trending Now
Why Filipinos should raise rabbits
Prefer local rice than imported rice
The hazards of single-use plastics (Part 2)
Monkeypox: COVID-19 in the making?
Don’t die of drowning!
Pinoy aquaman makes waves again 
Coral reefs: Going, going, gone?
Power from the water
Power from the water
Bamboo is no longer poor man’s timber
Home Health COVID Vaccine: To be or not to be

“A vaccine stimulates your immune system to produce antibodies, exactly like it would if you were exposed to the disease.  After getting vaccinated, you develop immunity to that disease, without having to get the disease first.” – US Centers for Disease Control and Prevention

To be or not to be – vaccinated, that is.

Right now, there are six vaccines available for the dreaded coronavirus disease 2019 (COVID-19).  These are Astrazeneca, COVAX Facility, Gamaleya, Novavax, Moderna, and Pfizer.

Next year, the Philippines will start vaccinating its citizens.  But the question is: are all Filipinos in favor of being immunized with the COVID vaccine?  There are those who are clamoring for it but there are others who are against it.

“This is a big problem now,” says Mark Inid, who now lives in the United States.  “We have been waiting for a vaccine and now that it is available, we see some hesitation.”

“Vaccinations are starting here now,” reports Julito Ugpo, a former Dabawenyo who now settles in Canada.  “Hopefully, by the end of next year, everything will go back to normal.”

Joseph Uy, who loves to travel, agrees.  “(The vaccine is) my second passport to travel,” he stressed.  Same with Steve Hyde who’s currently living in Cambodia.  He is for vaccination as he wants to visit the Philippines, Nepal, and China.

There are those who agree but as long as not vaccines manufactured from China and/or Russia.  “It depends on what vaccine to use,” says Dr. Rod Estigoy, a retired academician. “No, if it’s made in China,” pointed out Louie Bryan Lapat, an information office from Tagum City.

Veteran journalist Serafin Ledesma Jr. says he will take it no matter where the vaccines come from.  “Everything is science-based not based on biases,” he believes.

Some are hesitant to be vaccinated yet.  “Not now,” says Jeadelyn Balsa, who is still in Australia waiting to be back in Davao City.  “It’s too early to get it.  Let’s wait until the majority gets the shot to see the result.”

In the meantime, germs are all around us, both in our environment and in our bodies.  “When a person is susceptible and they encounter a harmful organism, it can lead to disease and death,” the World Health Organization (WHO) explains.

Man’s body, however, has many ways of defending itself against pathogens (disease-causing organisms).  Skin, mucus, and cilia (microscopic hairs that move debris away from the lungs) all work as physical barriers to prevent pathogens from entering the body in the first place.

“A pathogen is a bacterium, virus, or fungus that can cause disease within the body,” the WHO states.  “Each pathogen is made up of several subparts, usually unique to that specific pathogen and the disease it causes.  The subpart of the pathogen that causes the formation of antibodies is called an antigen.  The antibodies produced in response to the pathogen’s antigen are an important part of the immune system.”

In simpler terms, the antibodies can be considered as the soldiers in our body’s defense system.  “Each antibody in our system is trained to recognize one specific antigen,” the WHO says. “We have thousands of different antibodies in our bodies.  When the human body is exposed to an antigen for the first time, it takes time for the immune system to respond and produce antibodies specific to that antigen.”

In the meantime, the person is susceptible to becoming ill.  “Once the antigen-specific antibodies are produced, they work with the rest of the immune system to destroy the pathogen and stop the disease.  Antibodies to one pathogen generally don’t protect against another pathogen except when two pathogens are very similar to each other, like cousins,” the WHO says. 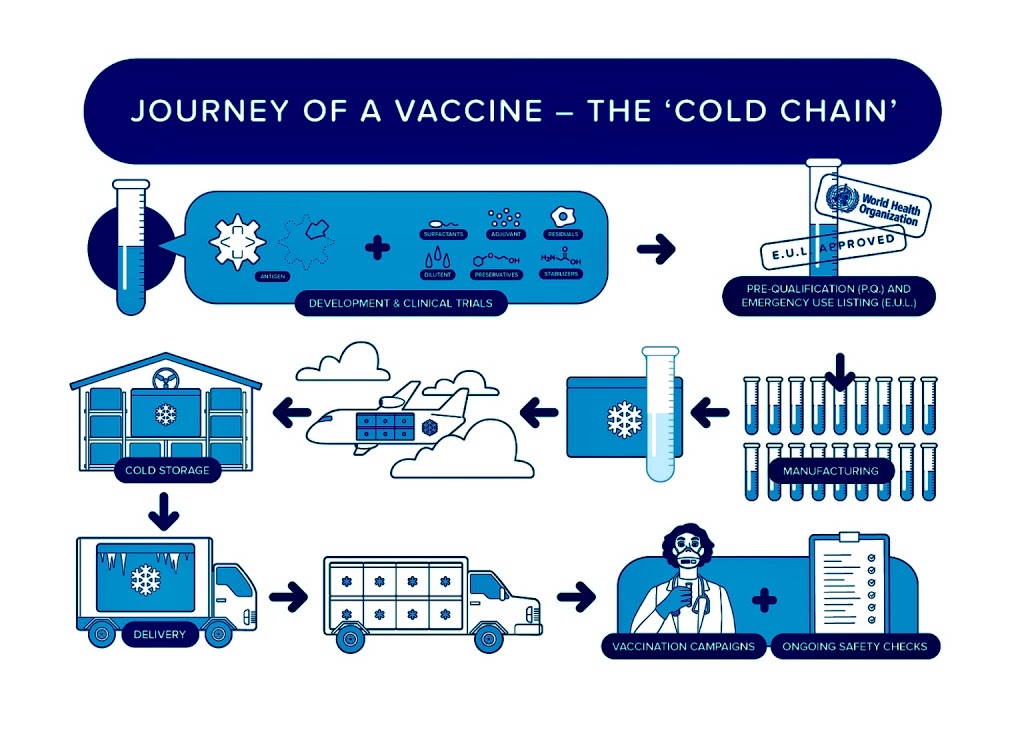 Infographics courtesy of WHO

“Once the body produces antibodies in its primary response to an antigen, it also creates antibody-producing memory cells, which remain alive even after the pathogen is defeated by the antibodies.  If the body is exposed to the same pathogen more than once, the antibody response is much faster and more effective than the first time because the memory cells are at the ready to pump out antibodies against the antigen.”

This means that if the person is exposed to a dangerous pathogen in the future, their immune system will be able to respond immediately, protecting against disease.

So, what’s the role of vaccines?  “Vaccines contain weakened or inactive parts of a particular organism (antigen) that triggers an immune response within the body,” the WHO explains.  “Newer vaccines contain the blueprint for producing antigens rather than the antigen itself.  Regardless of whether the vaccine is made up of the antigen itself or the blueprint so that the body will produce the antigen, this weakened version will not cause the disease in the person receiving the vaccine, but it will prompt their immune system to respond much as it would have on its first reaction to the actual pathogen.”

“Vaccines are one of our most important tools for preventing outbreaks and keeping the world safe,” Dr. Tedros Adhanom Ghebreyesus, Director-General of the World Health Organization (WHO), said in a statement. 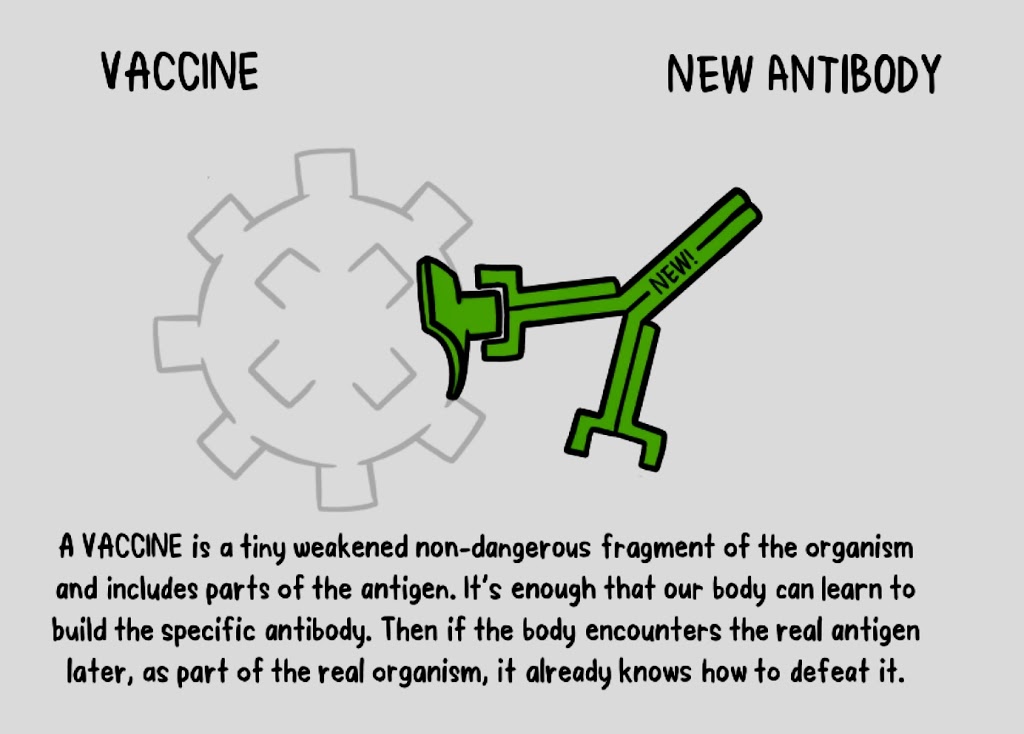 Infographics courtesy of WHO

But not everyone, however, can be vaccinated like those who have underlying health conditions that weakened their immune systems or who have severe allergies to some vaccine components.

But like all medicines, side effects can occur after getting a vaccine.  “However, these (side effects) are usually very minor and of short duration, such as a sore arm or a mild fever,” the United Nations health agency said.  “More serious side effects are possible, but extremely rare.”

A person is far more likely to be seriously harmed by disease than by a vaccine.  For example, tetanus can cause extreme pain, muscle spasms (lockjaw), and blood clots, measles can cause encephalitis (an infection of the brain), and blindness.

Many vaccine-preventable diseases can even result in death.  The benefits of vaccination greatly outweigh the risks, and many more illnesses and deaths would occur without vaccines.

According to WHO, all the ingredients of a vaccine play an important role in ensuring a vaccine is safe and effective.  Some of these include antigen (a killed or weakened form of a virus or bacteria, which trains the bodies to recognize and fight the disease that can be encountered later on), adjuvants (help to boost the immune response), preservatives (ensures a vaccine stays effective), and stabilizers (protect the vaccine during storage and transportation).

As with all medicines, every vaccine undergoes several studies and testing before it is released to the public.  “To develop a vaccine, there first has to be research done to understand the nature of the infection you’re trying to prevent,” Prof. Adam Finn, the David Baum professor of pediatrics at the University of Bristol in the United Kingdom, explained to Gary Finnegan’s Vaccine Today.

The WHO says that if the vaccine triggers an immune response, it is then tested in human clinical trials in three phases:

Phase 1: The vaccine is given to a small number of volunteers to assess its safety, confirm it generates an immune response, and determine the right dosage.  Generally, in this phase, vaccines are tested in young, healthy adult volunteers.

Phase 2: The vaccine is then given to several hundred volunteers to further assess its safety and ability to generate an immune response.  There are usually multiple trials in this phase to evaluate various age groups and different formulations of the vaccine.

Phase 3: The vaccine is next given to thousands of volunteers – and compared to a similar group of people who didn’t get the vaccine, but received a comparator product – to determine if the vaccine is effective against the disease it is designed to protect again and to study its safety in a much larger group of people.

“When the results of all these clinical trials are available, a series of steps is required, including reviews of efficacy and safety for regulatory and public health policy approvals,” the WHO says.  “Officials in each country closely review the study data and decide whether to authorize the vaccine for use.”

Studies may also take place after a vaccine is introduced.  These studies enable scientists to monitor efficacy and safety among an even larger number of people, over a longer timeframe.

Meanwhile, the WHO cites the importance of vaccination.  “Two key reasons to get vaccinated are to protect ourselves and to protect those around us,” the UN health agency reminds. –

Monkeypox: COVID-19 in the making?

The perils of teenage drinking

The truth about colon cancer

Watch out young men, it may be testicular...

Kidney diseases on the rise

What you need to know about mosquitoes

Smoking is bad for your health